The British Museum has teamed up with something called the Google Cultural Institute to make its entire collection online. A search for Tunisia found a collection labeled El Guettar, Tunisia. El Guettar is only about 22 km from Gafsa, the town where I spent three years of my life as a Peace Corps volunteer, teaching English in the Lycée Mixte de Gafsa. Elgia, my best student, was named Guettari.

Our group of volunteers arrived in Tunisia in Fall 1966, a little after school had started, almost 49 years ago!

Looking at the British Museum photos, it suddenly struck me that they had been taken when I was only one year old, 22 years earlier. In 1966, WWII seemed like the fairly distant past to me (the war next door in Algeria was much more recent). Looking back now in 2015, 22 years no longer seems that long.

Between WWII and 1966 Tunisia gained its independence from France, and Habib Bourguiba had became Tunisia’s first president.

By 1966 much had changed in Tunisia thanks to Bourguiba, but in many ways Gafsa still ressembled the photos taken in 1943, minus the soldiers and tanks, of course. General George Patton was no longer sitting nearby. Between Gafsa and El Guettar, the landscape was still bleak, as it probably is today.

One of the streets where I lived looked just like this scene in 1943. Even the people looked pretty much like this: 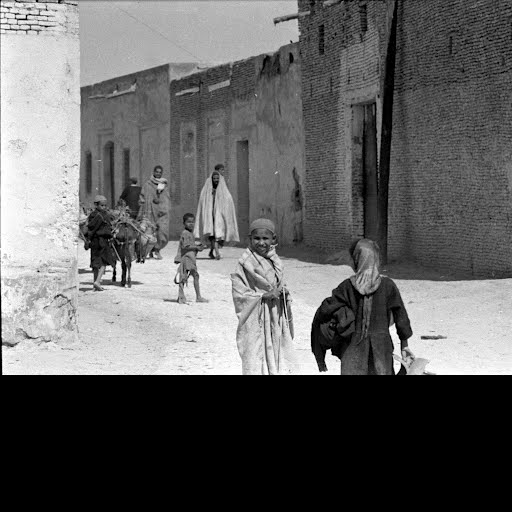